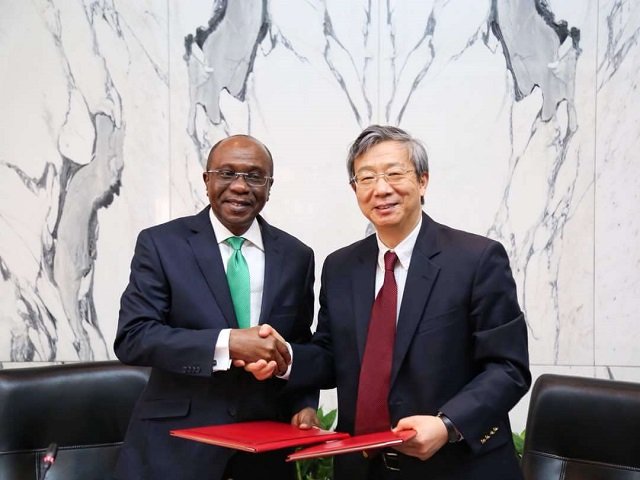 Although Nigeria has committed to the execution of the naira-yuan swap deal to salvage the naira, that has not foreclosed other alternatives from being dangled before it, even from no less a personality than the French President, Emmanuel Macron. During his last week working visit to Nigeria, the French helmsman proposed a common currency as an offshoot of regional integration and market access.

That proposal was coming after an analyst, Bismarck Rewane, the Chief Executive Officer of Financial Derivatives Limited, spoke in similar vein last month when he suggested that a naira swap with the South-African rand, could consolidate stronger trade between both countries.

Addressing young African entrepreneurs Wednesday in Lagos, Macron had declared: “I am a strong believer of ECOWAS and market access approach. You see, Nigeria is a big champion in ECOWAS. A sizeable number of your neighbours have to work and make business in English. For you to work and make business in French, you have to make regional integration real. I do believe in ECOWAS free trade, free market, free regulation and much more integration.

I am for regional integration. It is about time we go for more integration; market access and possibly a sort of common currency zone in the region. We have to change the rules, we have to accept this idea for a lot of countries’ integration in their own fashion. To achieve market access, you need stability; you need a framework. What African Union (AU) signed in March in Kigali to launch its own initiative for free trade is a good one.”

African leaders signed an agreement to set up a massive free trade area to improve regional integration and boost economic growth across the continent.

The deal to create the African Continental Free Trade Area (AfCFTA) was signed at an extraordinary summit in Kigali, Rwanda, by representatives of 44 out of the 55 AU-member states.

The AU Commission Chairman, Moussa Faki Mahamat, had said: “Our peoples, our business community and our youth in particular cannot wait any longer to see the lifting of the barriers that divide our continent, hinder its economic takeoff and perpetuate misery, even though Africa
is abundantly endowed with wealth.”

The agreement commits countries to removing tariffs on 90 per cent of goods, with 10 per cent of “sensitive items” to be phased in later. It will also liberalise trade in services and might in the future include free movement of people and a single currency.

AfCFTA will now have to be ratified by individual countries. By creating a free trade zone, African leaders hope to boost intra-Africa trade, which stands at around 10 per cent of all trade across the continent.

Nigeria pulled out of the signing ceremony after President Muhammadu Buhari cancelled his attendance.

A statement at the time said the decision was made “to allow time for broader consultations.”

The Nigeria Labour Congress (NLC) had warned Buhari against signing the agreement, calling it a “renewed, extremely dangerous and radioactive neoliberal policy initiative.”

Buhari’s decision to postpone signing was a setback for the deal as Nigeria is one of the continent’s economic powerhouses. But analysts welcomed the agreement’s potential to boost African economies.

“In the long-run, the continental free trade area has tremendous potential benefit to all the member countries in boosting their trade and transforming their economies,” Edward Brown, Director at the African Center for Economic Transformation, told a foreign news media.

“You’re talking about 1.2 billion (people) with a combined GDP of $2.2 trillion, so it’s a huge market,” he added, referring to the AU member states.

“The devil is in the implementation,” said Brown.

“The countries are going to go back home and look at their rules and regulations and begin to reform them and to align them with the free trade agreement. It’s going to take some time; this is the beginning of the process.”

As for the West Africa Monetary Zone (WAMZ), after four setbacks, the single currency project of the Economic Community of West African States (ECOWAS) was revived last month as news outlets were awash with the plan by ECOWAS parliamentarians to adopt new strategy in making the single currency dream work. The new measure, according to the report, would examine the level of preparedness of each member state, discuss and determine the baseline macroeconomic requirement and structural convergence

for economic and monetary integration that will lead to actualisation of a common currency for financial transactions and trade facilitation in the subregion, just like the Euro zone.

For Rewane, “any type of deal between Nigeria and South Africa will be useful and will consolidate stronger position of trade between both countries.”

He added that his proposed swap will ease pressure on external reserves, enhance infrastructural development, create jobs and improve trade between the two countries especially when these two are yet to sign on AfCFTA and the swap arrangement is also estimated to generate about $1 billion over three years. “The swap arrangement will also enhance trade flows by at least 50 per cent to $4 billion, ease demand pressure on both currencies, narrow Nigeria-South Africa imbalance to less than $1 billion and companies, which will play in retail, telecoms, power and entertainment sectors will be key beneficiaries of the arrangement,” he explained.

As for the much-awaited currency swap between Nigeria and China has finally become a done deal. And with the planned auctions of the Chinese yuan by the Central Bank of Nigeria (CBN) and the naira by the People’s Bank of China (PBoC) any time soon, firms looking to do business on either side will have their hands awash with liquidity without recourse to third currencies, particularly the almighty dollar.

The currency deal allows the CBN and the PBoC to, among other purposes, make available liquidity in their respective currencies for the facilitation and promotion of trade and investments across the two countries through the purchase, sale and subsequent repurchase and resale of the Chinese yuan (CNY) against the naira and vice versa.

According to CBN, the bilateral currency swap shall be used only for the purposes of trade finance and direct investment between China and Nigeria, maintain financial market stability, and for other purposes that both parties may agree upon.

The import of the deal is not lost on average Nigerians as they see it as a means to crash the price of goods made in China, current seen as too high for their present income stream. They believe that since almost 70 per cent of the country’s imports come from China and Asia, while just about 12 per cent come from USA, ‘there is practically no economic sense using dollars to transact business with China at more than N360 per $1 instead of N56.42 to the yuan?’

Going by this rate, yuan is about 642 per cent, or more than six times, cheaper than the dollar at the foreign exchange (forex) market. However, as an ordinary man on the street whips himself into a frenzy over the merits of this deal, analysts have cautioned that there are still two sides to a coin.

For instance, Ecobank Group Research, while hailing the deal doubts whether it would lead to the appreciation of the Naira: “In terms of the impact and implication, we believe that pressure on Nigerian importers who need
US dollars to import goods from China is likely to dissipate as well as improve CBN’s management of the country’s forex reserves.

“By year end, our expectations of lower oil prices and increased Foreign Portfolio Investors (FPI) exit from Nigerian naira assets ahead of the 2019 elections, are likely to offset some of the gains, resulting in softer NGN and bearish activity in the bonds market. CBN is likely to retain its exchange rate at N305-306:$1 and maintain the Secondary Market Intervention Sales (SMIS) windows at the NIFEX exchange rate of NGN327-340:$1”.

Toeing the same line of thought, the Director General of Lagos Chamber of Commerce and Industry (LCCI), Mr. Muda Yusuf, agreed that the swap deal would smoothen the payment system in the bilateral trade between the two countries but stressed that it might not really strengthen the naira at the forex market, as the nation would have to enhance its productive base to achieve that.

Ken Ukaoha, the President General of the National Association of Nigerian Traders (NANTS), an umbrella body of businesses trading across the globe, while speaking to a national daily recently, warned that we should “shine our eyes” because things might not be as they seem.

His words: “This policy can trigger high volumes of import into this country, which is good. But, of course, it can also trigger unrestricted import of substandard goods.”

Another public affairs commentator, Mr. Boniface Okezie, the President of Progressive Shareholders Association of Nigeria (PSAN), told newsmen that the currency swap deal was unnecessary since it would ensure that majority of the country’s foreign trade deals were channelled to the Chinese economy.

“This will lead to economic dependence despite the fact that Nigeria is a sovereign nation. The policy will lead to the influx of Chinese goods into our country considering that we are contending with weak regulation,” he said.

Okezie’s position echoes the recent warning by the US government that Nigeria and other African countries should be wary of Chinese deals. According to its immediate past Secretary of State, Rex Tillerson, China “encouraged dependency, utilised corrupt deals and endangered Africa’s natural resources.”

He added: “We are not in any way attempting to keep Chinese ‘dollars’ from Africa,” he said, “(but) it is important that African countries carefully consider the terms of those agreements and not forfeit their sovereignty.”

Last Thursday, CBN, in a circular by its Director, Financial Markets Department, Dr. Alvan Ikoku, announced plans to start bi-weekly auctions of the Chinese yuan, which is a maximum of 15 billion Renminbi or N720 billion with a three-year tenor.

Four banks, First Bank of Nigeria Limited, Stanbic IBTC, Standard Chartered Bank (SCB) and Zenith Bank Plc were earlier appointed as the settlement banks for the deal. And for any authorised bank to access the bi-weekly auction of the Chinese currency, such dealers “shall open Renminbi accounts with a correspondent bank and furnish CBN with its Renminbi account details, which may either be with a bank on-shore or offshore China.”

It also directed importers intending to import from China to obtain proforma invoices denominated in Renminbi as part of the documents required for the registration of ‘Form M’.